Why Won’t My Doctors Listen to Me?

I’m a 44 year old male and 2 years ago, I was going through a divorce, which was prompted after learning that my wife was having an affair.  Shortly after that, I developed cystic acne on my forehead and in my eyes which became very uncomfortable.

I was seen by an Opthalmologist and Dermatologist at a large practice and diagnosed with acne rosacea and ocular rosacea.  Even as an Emergency Room Registerd Nurse, I was not very familiar with these condition.  The treatment plan consisted of long term doxycycline, which I have taken several times before. So as a diligent professional and consumer, I researched my diagnosis and learned that this condition can cause debilitating flushing and eye pain.

My acne cleared up and my eyes became more comfortable.  However, two months into the treatment, I started waking up with bright red and flushed skin.  This was common with the side effects that I read about in my research.  I began taking pictures of the intermittent flushing and reported my symptoms to the Dermatologist.

I began waking up a little more swollen each day and continued to record my skin reaction with taking pictures and reporting the symptoms.  I was sent to have blood drawn and I was then diagnosed with a “systemic autoimmune condition” and was started on Plaquenil and the antibiotic was changed to Azithromyocin, which I have also taken mulitiple times in the past. I was then referred to see a Rheumatologist.

The Rheumatologist dismissed the diagnosis of autoimmune disease and sent me back to the Dermatologist. I sought multiple doctor opinions of my worsening skin condition.  By this point, my face was completely swollen, red and burning.  I was advised by several Dermatologists to continue antibiotics and then placed on beta blockers for the flushing.

After six months of debilitating pain and misery, I stopped all of the prescribed medications and it was discovered that I had a delayed onset hypersensitivity to both antibiotics which I had taken previously with no negative reaction or side effects. Flushing and swelling for six straight months has caused severe vascular damage to my face.  As a result, it has left me permanently swollen and bright red.  My last biopsy has shown that my lips are hardening and fibrotic.

As a result to all of this, I am unable to go outside. I loved being outside on the water with my three children.  However, when I do go outside, my face will burn and swell even more.  This has caused a strain on my relationship with my three children.  In the last three years,  have not left the house except, to go to work.  If I don’t sleep sitting up, I look like a monster.

I never thought a skin condition could make you want to give up your life.  I was devastated by losing my wife and family.  As a healthcare professional, I trusted my doctors.  I was told that a severe skin condition was a six month medication hypersensitivity.   I am past the 6 month mark with continued agony, depression and isolation.

I have included my before picture at the top and my after picture here to the left. I am sharing this information in hopes that it will help someone else.  Don’t be afraid to ask questions or be persistent when something does not sound or feel right.

I am grateful for connecting with Karen at Face2Face Healing to learn that I am not alone. Being able to share my thoughts and feelings with someone who understands how I feel is so important in your healing process. 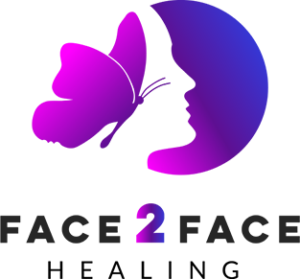